All of us would have assembled jigsaw puzzles. At least once in our life time or at least seen others assemble a jigsaw puzzle. Jigsaw puzzle is one of the most favorite pastimes across the world. The history of jigsaw puzzles goes back as far as eighteenth century. The first jigsaw puzzle was created by John Spilsbury in London.

Originally, jigsaw puzzles remained an educational tool or aid to elicit the interest of the children on various subjects. John Spilsbury was a mapmaker and an engraver. He created his first jigsaw using one of his maps. The map was mounted on a sheet of hardwood and he created a puzzle by cutting out the countries. This was used to teach children geography. The term jigsaw puzzles came to use only after 1880s. In 1880, treadle saw was introduced. By the end of the century, to make the process easy, plywood sheets were used rather than hardwood. Today’s die cut puzzles were not known in those days. The illustration was either painted on the plywood or glued on the front surface and the pictures were traced at the back for the cutting process. If you are lucky enough to find some of the oldest jigsaw puzzles, you will be able to see these pencil tracings.

History of Jigsaw Puzzles. Today you can see jigsaw puzzles made out of just about anything. Now with the latest technology, we can even create custom puzzles. One of the most popular forms of jigsaw puzzle today is photo puzzle. You can convert any of your photos into jigsaw puzzle. In 1800s however, they did not have the modern tools to cut the puzzles. By late 1800s cardboard sheets were used to create jigsaw puzzles. By the 20th century die-cut tools were introduced and this was found to be highly helpful in the jigsaw puzzle making units. With die-cut tools, puzzle production increased and puzzles of various forms were created. What remained an educational tool for children, started becoming a famous pastime game for all age groups today. Jigsaw puzzles have certainly come a long way and we can even find them in the form of postcards. Postcard puzzles and promotional puzzles are very famous these days.

Jigsaw puzzles in the form of custom puzzles and photo puzzles have become one of the most popular gifts for all occasions. As all age groups love these photo puzzles and personalized puzzles, you can use them as a good holiday gift or as a birthday gift. Originally, when they had very limited tools to create these jigsaw puzzles, the number of pieces and the size of the puzzles were also limited. Today we have giant sized jigsaw puzzles with over 1000 pieces. Jigsaw puzzles are created with various levels of complexities to suit the age group and the skill level of the assembler. Today you will be able to find jigsaw puzzles on just about any theme as you can convert any photo into a photo puzzle.
Photo puzzle categories
Photo Collage Creator 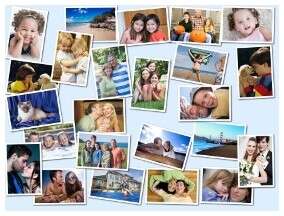